Oprah is a fraud, she is part of New World Order, and we just never knew

Oprah at a billionaire meeting on the subject of population control
https://twitter.com/Trumperland/status/951156038547382277

The Money Queen of NWO has money because of Weight Watchers
https://www.yahoo.com/finance/news/oprah-boosted-weight-watchers-stake-now-richer-president-trump-164432737.html 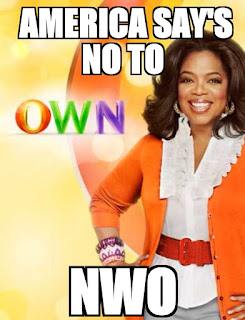 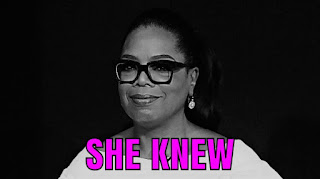 Boycott her, her channel OWN, her magazine, her food line, her other holdings, she is a satanic and racist woman, it's always been in front of us, but now way too many millions of us get it.

I sadly did not know, and fell for her, and while I was on twitter supporting her, back in 2013, and 2014, many people already knew and tried to tell me.  She had betrayed her own race that far back and it was just well hidden.

Oprah, in my view, might even use a double, she is that big of a con, in my view.  People have sent me videos that she is, nothing would surprise me, and they showed me different jaw lines, etc

Oprah - she is so much of a fake and does reject everything, she has a "cult" of those that can carry her secrets
https://youtu.be/VH2TfBgJrlo

Oprah is a clone say some
https://youtu.be/rhGHwqBXq7Y

There are dozens more videos on Oprah on Youtube, you search, Oprah satanic, Oprah NWO


OPRAH BEHIND THE SCENES

Oprah USES everyone, and she thinks people owe her, are her servants, and she does not thank people, she thinks she is above all human life.  She carefully selects those she can manipulate and use into her "cult".

When she left daytime television and her own audience turned on her, I did not get NWO, or why they were upset, as she was their $$$$$ meal ticket, and they were all mad she was expanding her brand.

I stuck up for her and started tweeting in support of her and her channel.  Since my background is a writer, and speaker, and against bullying anyone, I was immediately noticed.

When the Channel was trying to get more visible, Oprah put us on her twitter channel, OWN, to run it during certain shows, and I did it for the whole weekend, as one of the first people asked to do this.

I tweeted and got others to tweet, but I quickly found out that people started thinking that I was part of her A List, and perhaps at that short time, I sort of was.  I was getting everyone to support her, and her channel.  She had a very strange connection to Rich Cruse, a California photographer, and she purchased one of his lovely sunset photos, but he used that purchase to advance himself, and get "in" with celebrities.  I am not a celebrity chaser, and he got to the point where he was embellishing the Oprah narrative to impress people, and it became false and sickening.

At one point, he wanted me to start a secret Facebook account with him and some other A listers, which would be leaving people out.  The atmosphere became a competition of who had met her more, who thought this and that about her, and was so fake.  Rich Cruse, started lying about her in order to appease the requests from others that they have more insight into Oprah.   I am the opposite, I said nothing about her, and was focused on building the channel, and supporting her new shows.

I also asked Rich Cruse not to try to set me up directly with Oprah when I was hosting the channel, since I did not know her personally, and that's exactly what he did.  He had complained to me that he was not getting noticed by her, and why was I, and when I answered him, it was likely my tweets, and that they were building her network up, but that I did not know for sure.  He wanted to be hosting the channel also, and he got to do it.  He took a closeup of his face, just eyes and nose, and looked unprofessional and ridiculous, but he wanted fame, and to be noticed, meet other celebrities and so he kept trying to use one connection after another to get more famous.  I had to distance myself from Rich Cruse, and he lied about me, in order to cover for his shallow efforts to meet celebrities, through one instance after another.  When he did go to OWN related events, and Oprah's 8 city tour, he just looked stupid and out of place.  Each event, he would pose w/ famous people, and try to act as though he was so famous and so much a part of Oprah.

Oprah even has a fake group called OWN Ambassadors, which is just a colossal of puppets and servants that end up fighting for a retweet or tweet from Oprah. 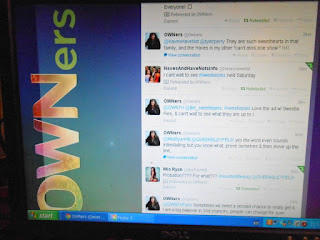 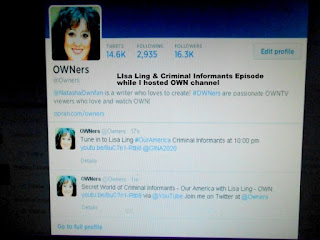 This is me hosting one of those times I was given the channel to run over the weekend for them, and they asked us not to go into direct messages, and I did not, I just tweeted for the shows that were on.  I got to see who was real and who was fake very fast.  Many were real like me, and I would imagine now they are on to Oprah as well, it was a shocking experience to find out that Oprah was just a big con. 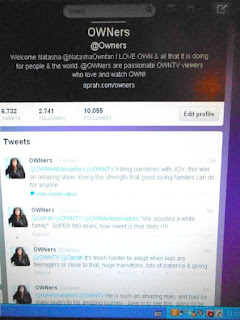 The ticker for me, was after I had included Rich Cruse in everything I was doing, he was jealous of that I got to host the channel twice, and made Oprah a video birthday card, asking others to wish her Happy Birthday, but he left me out, and never even told me about it, and then lied about it, after he posted the video, saying he could not include me.  He was jealous that I was so nice and kind to everyone, could not leave anyone out, and he wanted to compete with me.  I am not competitive, and I just removed myself from him, saying nothing.  Rich Cruse then tried to divide people, lying more about me, and even splitting the audience that I was trying to build by including everyone, and building up her network and the shows.  Rich Cruse was so insecure and so self serving, he continued to try to get people to block me on twitter and not "share twitter" with me, it was just trivial and ridiculous, all I did was ignore it, and continue on, supporting the network and shows.  Rich Cruse also told me that making the video birthday card was so much work he would never do it again, and it was impossible to get people to cooperate.  He tried to delete those messages that he wrote me, but I saved a bunch of them.  The difference between him and I, was that he was willing to do backwards summer-salts to get to Oprah, I was not.  I tweeted that day, that if it was meant for me to meet here I would, but I was not going to be set up to it by someone.

He was one of the first men I had ever known to be so "catty" a verb they usually use for girls.
I actually felt sorry for him, he just was such a desperate man.

But Oprah, when we were introduced on Twitter, did not even thank me for running her channel for free for the weekend, in her mind, her very sad pathetic warped mind, it was supposed to be "my honor", and no thanks needed for my 72 hours of free labor.  It was expected that I consider that a "privilege".  It's really sad when you can't thank anyone, and you are so warped that you truly think people owe you that, they do not.

I stayed on twitter for a long time still helping, and I helped Lisa Ling, with her show, and a couple of her stories were truly amazing stories about the secrets that were hidden from us, and Lisa Ling was able to get into telling them when no one else was.

When I was being blackmailed, a thing Oprah knew all about, I wrote to her asking for help, and my pleas were ignored, and since she was of course deep state, and knew what they were doing to me and why, she never responded at all.  Luckily, others that were real, did reach out to me, but Oprah did nothing, nor did her staff, even though I had sought their help.  She also could have done something to stop it, if she was real, but she is the sickest part of the deep state, and would sacrifice anyone, at any time, and ignore their cries for help.  This includes in her own race.  Oprah is about Oprah, and all about wealth.  She cares more about wealth, than anything else.  That is what makes her dangerous.

It was during the election that I was sent all of the material on Oprah, and the pieces finally were put together, and now millions are awake.  She does not stand for truth, or anything good, she has used herself, and others use her, and she would not save or protect anyone, she is soulless just like many have discovered.

Oprah deceived everyone over Obama, and she used her fame to help deceive the world and get him elected.  No one ever heard of him before he was shown to use through Oprah, and she had stated before that she was not into politics on her show.

But she does not even have control over her life and wealth, she is controlled by the deep state and now trying to get back in to destroy the USA possibly as a candidate, and that's when it's relevant to alert more people what a sick woman, fraud, liar, and con she is.  And GONE is the day, when she can get up and make a phony speech and suck in people to fall for it, we are WIDE awake.

Two Times I was on TMZ, and both times, I ended up defending Oprah,  once when she cut the line at some awards show, and at the time, I tried to say that perhaps she had an emergency, or needed the ladies room, I think now, it was more that she thinks she's "above" lines and waiting w/ her peers.

The next time, Harvey Levin asked me about Oprah and marriage, and why she never married, and while I had no answer back then, I can answer it now.  It would destroy the lie, and force her to act like a married woman, vs. a single con.  If she married, it would divide her power, & have her accountable as a wife, and that standard.  She stays unmarried to cover for the entire charade of her "brand". 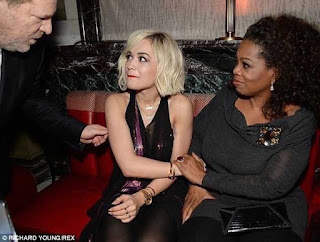 Oprah would send anyone to be raped by Harvey Weinstein to advance their careers, look at this sweet young lady, meeting a predator Look who else she hangs out with????? George Soros 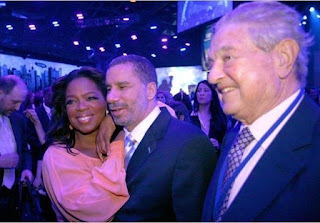 Many women that have been raped, would still let others be raped, Oprah is not alone in this, she would not protect anyone from it, it happened even at her school in Africa She did not even protect girls in her own school, there should have been 0, 0 , 0 harm to a single child, this was something people never held her accountable enough for.

Today I did a YouTube Search on Oprah Fraud, and what a surprise, my videos showed up first, 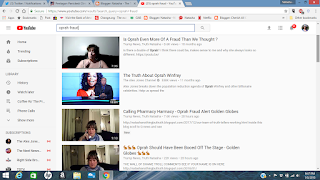 My credibility is weighed against knowledge of her fraud and my own truth.

No one can make a 10 minute speech any more and fool us into the lie.  It will never happen again, too many people are awake

James Woods Points Out Oprah is complicit in sending girls to be raped and she did know,
https://www.westernjournalism.com/golden-globes-speech-james-woods-shares-3-photos-oprahs-past/?utm_source=Email&utm_medium=conservative-brief&utm_campaign=weeklyam&utm_content=conservative-tribune